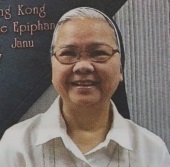 In 2017 Cora left her home country of Philippines for Hong Kong, where she is Director of the Diocesan Pastoral Centre for Filipinos, which welcomes migrants of all nationalities

This article 'An Inspiring and Joyful Mission for Migrants' was published in the Sunday Examiner, Catholic News of the Week, Hong Kong,  14 October 2018

‘God, was it for them that you sent me as your partner in mission in Hong Kong?  How do you want me to serve them?’  For Sister Corazon Demetillo, the director of the Diocesan Pastoral Centre for Filipinos (DPCF), these were the first questions she had in mind a she first arrived in Hong Kong last year and saw so many Filipinos everywhere in Central.

The Good Shepherd sister finds her service to migrants in Hong Kong a joyful mission and what has sustained her in various kinds of services so far is the love and faithfulness of God.

Serving migrants also turned out to be an inspiring mission for her as the migrants have a lot to learn from Sister Demetillo.  She sounds exuberant as she feels that ‘Despite the demands and difficulties they encounter in the workplace, they can still smile, laugh, sing, dance, participate in Church services, join various activities during their off days, and help their co-workers who are in need.’

She said she feels glad to see migrants well dressed on their days off and happy with or without any occasion.  It also delights her to witness the unfolding of their talents during special programmes and celebrations.

On the other hand, the sister feels that termination from work is a shocking reality of each day as the centre receives four to seven women being terminated almost every day.  She said she often finds them helpless and traumatised, while some are even injured, abused or seriously ill.

The Pastoral Centre cares for such worker whose contract is terminated and if needed, they are sent to one of the two shelter homes of the diocese. The sister feels saddened to listen to workers’ painful stories – about their work or the families they left behind, and a feeling of not being appreciated.  She believes it is a constant challenge to discern and offer the kind of services that can help or empower them.

The 69 year old Sister Demetillo was born to a Catholic family in Bulacan, the Philippines, who used to pray every night together.  The prayer made her family closer to God and to one another.  She remembers her parents often saying that everything they received was out of God’s blessing so they needed to be shared with others in need.  She witnessed how her parents lived out their faith in their daily lives by attending to the needy, caring for the poor, listening and helping the neighbours with problems, and generously sharing with others the blessings received from God.

As a religious, she said she feels a deep sense of gratitude and fulfilment as she accompanies the migrants in their spiritual life and helps them encounter God.  I am humbled and moved to glorify God whenever they are reconciled with God and with oneself, and come to a realisation that God forgives and loves them as they are,’ she said.

She added that giving them recollections or retreats, scripture reflections and faith-sharing is also a source of nourishment for her.

She started to be active in Church services at the age of 17.  She was happy and contented with her involvement in different activities in the community for five years until she began to discern her vocation to be with the Lord and to continue his mission.  As part of her discernment, she reviewd her life, as well as her family’s journey.  She was overwhelmed by God’s love and blessings through life’s challenges.  She believed that responding to her vocation would be the best way to thank God for his love and faithfulness.

At age 25, despite some resistance from her family, she joined the Congregation of Our Lady of Charity of the Good Shepherd in Manila because she was attracted by their services for the marginalised and for the women in distress.

Sister Demetillo came to Hong Kong on 26 July 2017.  After a training period of five months, she became the director of the DPCF in January 2018.  She stressed that although the official name of the centre only mentions Filipinos, the centre is for migrants in general as it welcomes migrants of all nationalities.

She said the Centre’s services rely on the support of committed staff, mission partners, benefactors, and the support of Bishop Michael Yeung Ming-cheung.

She is also grateful for her predecessor, Sister Felicitas Nisperos, who had served in Hong Kong for decades and the centre since 2001.

'Gathering of Women in the Bible', in Hong Kong

On 7 June 2019, groups of migrant women in Hong Kong produced a creative theatrical event, showcasing the lives of twelve women in the Bible, and the relevance of each woman to today's situations

Hong Kong, Macau and Taiwan plan for the future

The Good Shepherd Communities of Hong Kong, Macau and Taiwan participated in a strategic planning exercise in their respective locations, in late February 2019