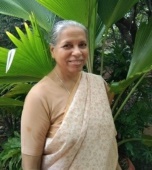 For many years Sabina used social work and law qualifications to advocate for women suffering severe violence and social and legal disadvantage, and served in leadership at Congregational and Province levels

Experienced in ministry and leadership

I was born in a very deeply rooted Catholic family in Kerala. My parents and grandparents being very pious and devout people brought me up in the Catholic faith. As the first grandchild in the family I received a lot of love and affection from my grandparents who lived with us. When I was just one year, I lost my mother and it was a tragedy in the family. My father and grandmother took care of me lovingly and brought me up with care. When I was five my father married again. I have 4 sisters and a brother. In 2015 I lost one of my Sisters while I was in Angers for the Congregational Chapter. My stepmother will be 94 on 28th of October.

I was adventurous and filled with courage from childhood. My friends in the school and collage admired and loved me. From when I was small, I had love for those who were economically poor. I played and ate in a poor family who lived and worked in our land. My parents objected to that but occasionally I did it without my parents knowing it. I was smart in school and studied well. I was good at sports without any coaching and learned swimming at the age of 10. First time I thought of Religious Life was when I was studying 6th grade. From my parish a girl joined a Congregation in Rajasthan, up North India. I admired her courage to travel so far to become a missionary. That time I decided I too must become a missionary. Being fond of adventure, desire to travel and see new places were part of my dream.

When I was doing 12th grade, I began to think what I should do. The childhood desire to be a missionary became strong in my mind. I spoke with my parish priest since I did not know any Congregations outside of Kerala. I did not want to join the Congregations in Kerala. That summer vacation I went for a vocation camp to a faraway collage. My father was not very happy about it but allowed me. After three days of camp it was clear for me, I had a vocation. Meanwhile my parish priest suggested the Good Shepherd Congregation in Bangalore since he had visited the sisters early and knew the then Provincial. He made all the arrangements with the sisters and spoke with my family. Thus, at the age of 17 I joined as a candidate in Bangalore Good Shepherd Convent. Since I did not know how to communicate in English, some time was given to picking up the English language.  We were five of us in the Novitiate from three different states of India speaking three different languages. It was a multicultural and linguistic group, and we adjusted very well to each other. Common language in the formation was English.

I began my ministry with single mothers and their babies for two years. Later I completed my studies in Social Work and Law.  The ministry with 'Dalit' women and children was very challenging for me but along with three other sisters we took up issues of atrocities on women, especially dowry deaths, which were very prevalent in those areas where we worked. We empowered women by building up their capacity and skills. We started an organization named 'Organization for women’s rights' in the 1980s.  We took up about 500 cases of atrocities and sought justice for women and girls in a seven years period. These years were very challenging and innovative for me and I learnt much about how the Government, the Police officials, the medical system, the husband’s family all worked against the woman who is a victim of dowry violence.

Very often even in a dying declaration the victim supported the husband who was the culprit. It was difficult for me to understand why she was not saying the truth even as she was dying. Later I understood that if she died, she hoped the husband would take care of their children and, supposing she recovered, she would have to live with the same man. So how could she speak against him? According to law, a dying declaration is considered as a document of truth. That is the reason we expected the women to speak the truth. Many times, we were disappointed and the case went against the women. We also had taken up mediation work or outside court settlement of cases.

I was Province leader of India/Nepal from 1995 to 2001. Member of the Congregational Leadership Team 2003 to 2009. Then when I was Province leader of Central East India/Nepal 2013 to 2019, the experience was totally different. Our sisters were in eight different states of India and Nepal. That called me to travel a lot. There were more young sisters in the Unit which was a challenge when it came to leadership roles. All these called for a lot of accompaniment, guidance and support of sisters.

The Provincialate in Nagpur began in a small existing community building. For sessions, retreats or meetings we had to hire venues in different places and I had to travel there to be part of the sessions. A new building for the Provincialate with all facilities, was built and inaugurated on the 24th April 2019.  Launching the Mission Development Office also was very new for us in Central East India, as well as in Nepal.

Today when I hear the outcome of all these new beginnings, I feel very happy and joyful in my heart. Like Mary I am able to sing the “Magnificat.“

Stop Hunger is a global organization committed to a hunger-free world. Bisto Bai Meravi, member of a GS project in Central East India was nominated by the Sisters and GSIF and received an International Award