Non Violent Communication as a way of life 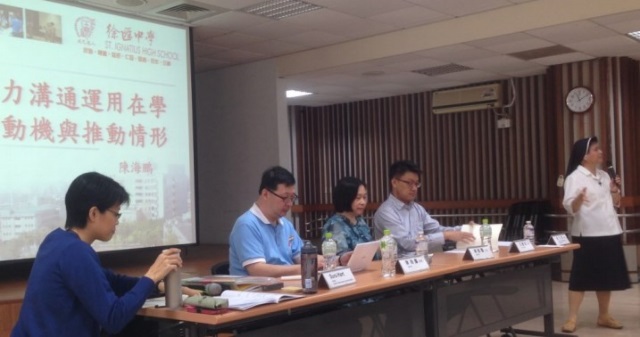 A new language of life

The Good Shepherd Sisters in Macau run a crisis centre for women who often come to our shelter with their children.  Since many of the women have suffered domestic violence, in 2006 when we decided to develop our service to include a focus on prevention we discovered NVC, Non Violent Communication. This is a program developed by Dr. Marshall Rosenberg, an American clinical psychologist who first introduced it in the 1960’s in the US. By the time we learned about it, it was being taught in offices, classrooms, families, prisons and other settings around the world.

We got a grant to do a pilot project with NVC and invited two Chinese trainers, one from the US and one from Mainland China to train our staff.  After that we employed one social worker just to promote NVC in Macau.  Sister Rosanna Hung a Good Shepherd Sister from Taiwan read some materials in English and was so impressed that she started translating into Chinese.  It was Rosanna who suggested the Chinese translation of the term which is the one we now use: ‘Good Will Communication’. The words ‘good will’ capture the core meaning of this program.  It is based on a belief in the dignity of every person, his/her right to respect and the possibility of achieving harmonious relationships when the starting point of any communication is good will on the part of the sender and the presumption of good will on the part of the receiver. NVC is not just a communication technique but more like a philosophy of life. In fact, the subtitle of Dr. Rosenberg’s Book is:

A Language of Life

In Hong Kong Sister Bernadette Yuen started teaching NVC to the staff and girls of Marycove, our residential centre for girls, and from there branched out to members of the parish.  She also went to Australia to attend further training.

Rosanna Hung started to promote NVC in a parish in Taipei. After that she also went for further training in the US.  Recently at the request of the Bishop of Taichung in Taiwan she has been promoting NVC in his diocese and also wherever else she received a request. In April of this year she organized a two day conference entitled ‘Non Violent Communication (NVC) Application in Schools’. Good Shepherd Sisters and staff from Macau and Hong Kong also went to Taiwan and together with our Sisters in Taiwan attended the conference. There were more than 60 participants from different parts of Taiwan, the majority being teachers, principals and social workers.

Changing the 'culture' of a group

A guest speaker from the US, Sura Hart, gave some input describing her experience.  She is the author of several books on the subject. But most impressive was the sharing of the teachers who had learned NVC and then introduced it in their schools. To hear how it had changed the whole culture of the school was so encouraging. Teachers had begun to relate to the students with understanding and sensitivity and stop relying on reward and punishment to get the children to behave.  And the children were responding by sharing their feelings and desires because they were being listened to. Of course the transformation did not occur overnight and required a lot of work which needs to be sustained, but it was a joy to see how many lives were being touched by this approach which is so in keeping with the pedagogy of St Mary Euphrasia.

Potential to transform communities, too!

We thought this was a good opportunity not only to congratulate Sister Rosanna on her good work but to share with our sisters and lay Mission Partners worldwide the benefits of NVC ‘Good Will Communication’.

We could try it in our communities too!