Reflections from an Asian missionary in West Africa 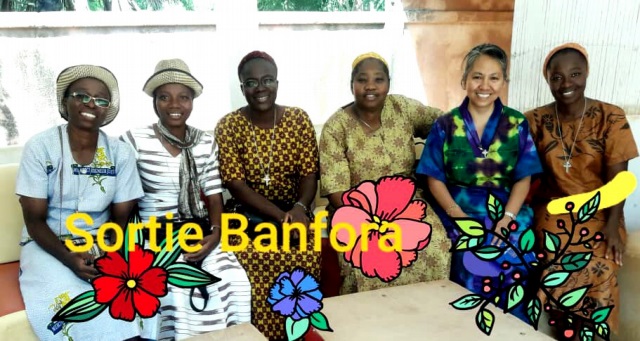 Inculturation in formation - A mission of compassion

In 2016 Sr Maureen Catabian was invited to move from her home country of Philippines to Senegal to work in the area of initial formation. This was her first mission in a different culture from her own, after 25 years as a Good Shepherd sister.  On 28 January 2017 Maureen moved to Burkina Faso and some months later she shared with us her reflections upon life there 2017 Reflections of an Asian missionary in West Africa

Now, two years later, Maureen again responds to an invitation to update us about her life in Burkina Faso and her ongoing reflections upon the missionary spirit.

SORTIE BANFORA means our community outing to Banfora ( a place which is known for its 'Cascades').

Foundations of the ministry

On December 3, 2011 the first three Good Shepherd missionary sisters from India, Philippines and Burkina Faso started the foundation of what has now evolved as Religious of the Good Shepherd-Bobo Dioulasso Community. We are part of the Communities of West Africa (with Senegal) where we belong to the RIMOA region.

It has been nearly two years since I arrived for my mission in Burkina Faso. With ten months of immersion and preparation, the blessing of the prenovitiate formation house was realized on November 14, 2017 (on the birthday on earth of Saint John Eudes!). On the same day, the first two postulants were admitted by the community in a simple ceremony.  These form the beginnings of the prenovitiate formation house. At present we are an international community of ten women - four finally professed, 4 temporary professed and 2 prenovices. We are from Burkina Faso, Mali, India and Philippines.

Our ministries include a temporary shelter for women and  girls in difficult situations, a kindergarten, a center for formation of women, a Restaurant called ‘Le Yelemani’ (which means transformation), prison ministry with women detainees, support for education of poor girls struggling with poverty, and microfinance for families in the area struggling with poverty.

'I will give you a new heart'

‘I will give you a new heart!’-- such familiar words took a new meaning in my present mission. The challenging transition which began on learning another language and being exposed to the franco-african culture did not come handy. I am discovering and uncovering a lot of cultural biases and prejudices.  Personal reactions and resistances are surfacing every day. I have to literally shed them off daily!  Being an asian missionary in a west african francophone context is indeed such a hurdle.  I felt like falling off from the horse! I continue to go through processes of deformation, reformation and transformation. It is an experience of paschal mystery. As each day passes, I could hear myself whisper- ‘mea culpa, mea culpa!’ It is a daily conversion experience – transforming, evolving and a forming of a new heart!

Amidst all these, however, were simple moments of joy, finding ‘pearls of great price!’ Here is one example. I have become used to being referred to as a ‘white woman’, ‘femme blanche’, ‘toubabou’( white in local language).  Children call me ‘toubabou’ as I walk the streets.  At first, I felt offended. But when the reasons were explained, and the meaning of which I understood everything began to change.  Actually, it is an ‘endearing’ way of welcome by the children coupled with their beautiful smiles.   They would run towards me to shake my hand and regard the color of my skin. They feel happy and contented when I return their greeting.  It is for me a ‘be-friending’ moment with the children.

One time, on our way home I met a 6 year old boy and his mother selling ‘grilled bananas’.  The prenovices and I stopped to buy some bananas.  It tasted really delicious! The little boy was so delighted to see me he ran to get a small chair (tabore) to have me seated beside him.  He started to converse with me in his native language-Jula.  He showed me his slippers and pointed to my watch. He seemed excited to meet us. When we got our grilled bananas, we started to bid them goodbye.  The little boy suddenly burst out crying! When I asked why he was crying, they explained that the boy told his mother that he wanted to marry the ‘toubabou’!  Oh, how my heart broke when I understood why he was crying! Such a pure and innocent spirit!

Everyday our common greetings are ‘bonjour’ and ‘merci’. For every person I meet, I have to say ‘bonjour’ and say ‘are you okay’, ‘Tu vas bien?’ For every little action , I say ‘merci’. Sometimes, it feels redundant, repeating those words over and over again every time I meet a person on every occasion. Conversely, they ask the same questions and inquire ‘Tu as bien dormir?’ (Did you have a good sleep?). I keep wondering, why do they need to know?  Then a litany of questions follow – ‘Est la matinee?’ (how’s the morning?), ‘la sante? (the health?), la famille? (the family), les enfants (the children) ‘la communaute?’(the community), ‘la travaille?’ (the work). There is also a ritual of shaking of hands upon greeting and upon saying goodbye to someone.  After sometime though, I got used to these repetitive gestures. I realized it is their way of giving importance to another’s ‘presence’ or announcing one’s presence.  It is according respect for a person in a polite, reverent manner.  It genuinely reflects their own values in life - health, kinship, family, children, community and work.

A process of mutual transformation

Many times, I would ask myself, do I really understand things in the way that they understand things? Am I fully immersing in the world of the other by seeing their world from where they are? Understanding their own contexts and perspectives? Do I allow them to enter and view my world too?  It is a mutual process of transformation, of understanding one another’s ‘culture’ which eventually opens up and expands our world. This is the essence of ‘inculturation’ in the mission of formation. Hence, in inculturation, it is important to honor diversity/plurality in the process.  This can be possible if we are willing to risk to know, be known and enter another world. To be surprised by the novelties of what we discover and what really matters in each one’s world. But I realize, more often than not, their ‘world’ is not even represented in the so called existing ‘worldview’ as no one has ever seen, experienced nor understood what their actual realities are.

Inculturation, an act of compassion

Inculturation is essentially an act of compassion.  One tries to be present with the other person wherever she or he is at the very moment. It is a mutual welcoming into each other’s sacred space.  It is being one with the other. Inculturation is an act of solidarity. Inculturation is mission. Mission is inculturation. I used to idealize the life of a missionary.  Being a missionary in theory is one thing while practicing it is another thing. However, to be a missionary is such an enriching, transforming and rewarding experience. When I think of someone who is best at inculturation and an ideal missionary - I can only think of Jesus, the Good Shepherd. Jesus walked vast pastures and fields entering towns and villages in order to meet people where they are. He immersed himself and became vulnerable to others. He was so profoundly affected by human suffering that He gave up his own life for us.  God had sent His only Son, Jesus to enter the human world, to walk with us and be one of us. Jesus understood our human heart by suffering with humanity. Jesus knew how weak and sinful our heart is. And He believed that we can be transformed and renewed by the Holy Spirit! Our God is truly a missionary God.

A true missionary never says it is enough! A missionary must have a spirit that is open to risk, full of hope and zeal! A seed that is not broken open and buried will never know its potentials to grow into a tree. No matter how difficult life situations may be because of ‘human sinfulness’, no matter how wounded our humanity is, growth, transformation, conversion and reconciliation are always possible with God’s grace and mercy.