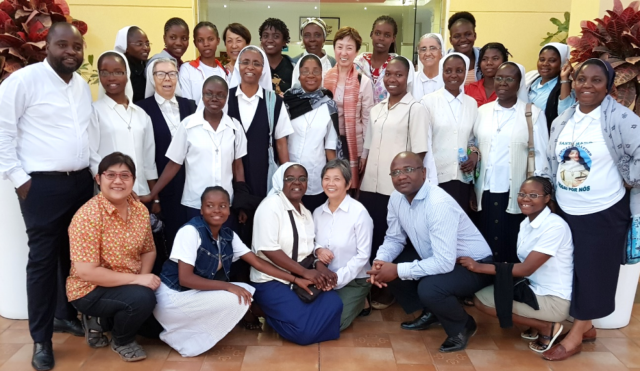 A Time for Remembrance, Appreciation and Gratitude

“Beautiful Africa!  Oh my God, how I love it!”  St Mary Euphrasia

The Inauguration of the Sr Susan Marie Chia Training Centre in Luanda, Angola was held on 15 August 2017.  Representing the Province of Singapore/Malaysia were Sr Lucy Chia and lay Mission Partners Cecilia and Agnes Ee and Melina Ong.  They describe the events....

What joy it was to be in Angola to witness the inauguration of the Sr Susan Marie Chia Training Centre held on 15 August 2017.

We thank the Province of Angola for inviting us to this significant occasion. The warm welcome and love extended to us by every sister and mission partner we met was much appreciated.  They spared no effort in making us feel at home, and as Sr Lucy said at one of our sharing sessions in Angola, ‘I feel so at home here, I feel I am with family.’

Being accompanied by Sr Rita almost every step of the way during our stay was reassuring.  She ensured our safety, comfort and most importantly, she patiently explained to us the history of Angola, the culture, the struggles of the people, the founding and ministries of the Good Shepherd Sisters in Angola and the challenges they faced.  The time we spent at meetings with Sisters and Lay Mission Partners in Kicolo and Talatona helped us to understand better the works that are being carried out in Angola.  We appreciate the perseverance of the Sisters, their audacity and courage to carry out the Good Shepherd mission in Angola regardless of the many difficulties or dangers.

The visit was also a time for us to re-connect with all the sisters who came to Singapore for the English and formation sessions in late 2015 and early 2016.

The objective of the Centre is to provide literacy and skills training aimed at empowering the local women with business start-up and employment opportunities.

Some of the courses available at the Centre are English language, literacy, computer skills, basic business skills, cooking, baking and sewing.  In addition, the Centre will provide job placement services for its graduates.

1,200 women are expected to participate in the programmes annually.

Mass was celebrated by Archbishop Filomeno do Nascimento Vieira Dias.

See photos of the new building, the guests and opening ceremony and all participants.

Personal reflections of Cecilia and Agnes

When our friends and mission partners heard about the planned visit to Angola, many expressed concerns for our safety.  On 12 August, we landed in Luanda airport and were met by Sr Marcelina who welcomed us warmly.

The experience at Kicolo where we spent a night, and our five nights at Talatona, was an eye opener and made us realise how much we take for granted what we have in Singapore, especially the aspect of physical safety.  That aside, it was so good to catch up with the Sisters who came to Singapore two years ago.  The stories of their civil war experience were heart-breaking.  We hope and pray for God’s continued protection for each one of them.

Without a doubt, the highlight of the visit was our participation at the official opening of the Sr Susan Marie Chia Training Centre which brought tears and memories of our dear friend Susan.  It was evident that she was much loved and missed by everyone who was connected with her in one way or another in Angola.  We are grateful for the opportunity to be present at the opening ceremony and we thank the Good Shepherd Sisters for their hospitality, love and care during our stay there.