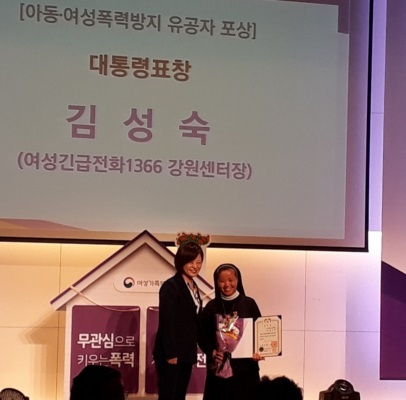 An organized reponse to women

Sister Sungsook Droste Kim coordinates the Good Shepherd 24 hour counselling/ referral service (Gangwon 1366 Hotline Center for Women) available for women in situations of domestic violence, sexual harassment, prostitution and similar hardships.  During the 2018 Winter Olympics, Sr Kim spent many hours at the Games, offering support and a listening ear to women.  On 27 November 2018, she was presented with a national Award.

An annual Assembly for the Prevention of Sexual Violence & Domestic Violence of 2018 was held on November 27 at Ferrum Tower in Seoul. Awards were presented to those who have devoted themselves in the field to preventing violence against children and women, and this year's Presidential Commendation went to Good Shepherd Sister Sungsook Droste Kim who is director of Gangwon 1366 Hotline Center for Women. Sr. Kim has been committed to protecting and preventing victims of violence against women for 20 years. During the 2018 PyeongChang Winter Olympic Games, she operated the sexual violence counseling center in the athletes’ village.

In response to growing awareness of the scale and impact of sexual assault and inappropriate behaviour at such international events, organizers of the recent Winter Olympics in Pyeongchang, South Korea planned an organised and advertised contingent of support services.

Sungsook formed part of a team of 14,000 volunteers, members of the local community, who maintained a strong presence throughout the Olympics to offer support and a listening ear to women, or men, who may experience abuse or misconduct.  She spent hours each day at the Games, available for ministry in her office, the ‘Gender Equality Support Centre’ located under the ski lift at the Phoenix Snow Park.

Read interesting media articles below, one of which features the work of Sr Kim.

The article from AP News features the work of Sr Kim and an interview with her.

Click here for articles from AP News and Mic