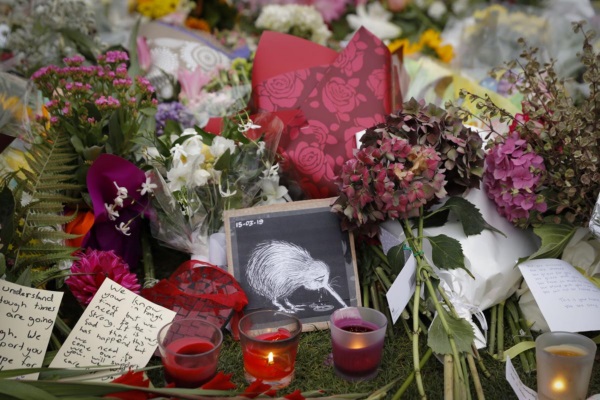 Reflections upon a dark day

In the beautiful, usually peaceful city of Christchurch, on the South Island of Aotearoa New Zealand people gathered for Friday prayer in the Al Noor and Linwood mosques on 15 March 2019.  A lone gunman armed with semi automatic weapons fired without warning and indiscriminately into groups of worshippers at each mosque. 50 people died and many were injured.  The alleged gunman, a 28 year old Australian who had lived for only a few years in NZ, was arrested by police and awaits trial in prison.

The instinctive response to the Muslim community by Prime Minister of New Zealand, Jacinda Ardern, was praised throughout the world.  She acknowledged that some of the people killed and injured had come to New Zealand as refugees fleeing fear and violence in their countries of origin, and were settling into a new life in a peaceful community.  The terrible circumstances of the attack and Jacinda Ardern's heartfelt words generated a flood of positive outreach to Muslim communities in New Zealand, as well as in Australia.

Below are some reflections from both countries.

Ms Nicola Eccleton is Social Inclusion Manager for Good Shepherd New Zealand, based in Christchurch.  Nicola has been liaising with community agencies in Christchurch to support people most affected.

Friday 15 March 2019 brought great tragedy to Christchurch, New Zealand. Christchurch is a small city, with an even smaller Muslim community, and we are all shocked, saddened and deeply affected by a tragedy of this scale.

As an immediate response, the local Muslim community set up a Welfare Centre to provide a central place for people to gather and receive support. A local team of community development/NGO/social workers and volunteers led by the Christchurch City Council provided resourcing and support for the local Muslim leaders to run the Centre.

The Centre provided a place for gathering, meals, prayer, children’s play and information. A range of government agencies such as Immigration NZ and the Ministry of Social Development were also on site providing individualised support for people directly affected, and their families. Many people had flown into Christchurch from all over the world at short notice to support their community, meaning there were many international guests who needed support also.

We are now in the second week after the attack and the focus has shifted slightly to wrapping around the local community to develop a plan for long-term support.

The tragedy has left many women and children without their husband and father, and in many cases, the men killed were also the family’s primary earner.

Christchurch’s Muslim community is also made up of a large number of women from refugee and migrant backgrounds, and as such many have limited English language and do not drive.

The support required from the community will be significant and long-term, and in the coming months Good Shepherd NZ will continue to offer assistance where it can.

The horror of the attack on devout Muslim people at prayer in their Mosques in Christchurch on 15 March 2019 is etched on the hearts and minds of the majority of those of us who live in Aotearoa New Zealand. Shock, anger, grief and sadness have been experienced, as well as compassion and generosity,and a growing understanding of how important it is to honour others. The leadership of our Prime Minister Jacinda Ardern has been an inspiration and comfort to the many victims, their families and the nation.

I would like to focus on the person who committed the horrendous crime. It would appear he planned and carried out his terrible actions alone. Without in any way diminishing his personal responsibility for his actions, I cannot but wonder who and what influenced him. What was life like for him as a child and adolescent,what were the conversations around the family home, who were his friends (did he have friends?), what films, videos did he watch? My point is, others, in one way or another, helped to create the 'monster' he became. What are his thoughts and feelings now as he spends his days in a prison cell isolated from other prisoners?  How do the prison officers relate to him?

St Mary Euphrasia said a person is of more value than a world - a quote we frequently use. Possibly most of us would, understandably, find it difficult to apply it wholeheartedly to this man. While we pray for the victims and their families and friends, can we find within our hearts the good will to pray for him and his family as they come to terms with the reality of what has been done and deal with their disbelief, fear, shame, grief.

Recently I read a newspaper item that told of the fact that not one Muslim person / family connected to those who lost their life or were injured spoke of revenge or retaliation.

Somehow we need to believe our prayer, our attitude, our actions can contribute to a safer, more peaceful and just world.

Two Australian sisters attended a solidarity event, one of many such gatherings held throughout their country.