Reflections of a Philippine missionary in South Korea 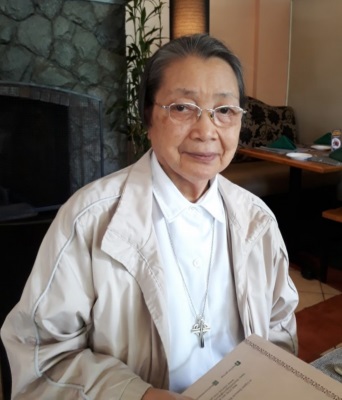 A tree bearing much fruit....

Reflections of Sr. Rita Danganan, RGS, on her Korean Mission

The call to Korea

It was in 1970 when Sr. Mary John Kroner, our provincial leader, told me “I am sending you to Korea”. That time, Los Angeles, Hong Kong and Korea were under the Philippine Province.

When the Good Shepherd sisters went to Korea in the 1960s, there were few Christians, especially Catholics. I was inspired by the story of how Christianity was brought to Korea from China by lay people in the 18th century. For many years there were no priests to serve the Korean converts. When foreign missionaries entered the country by stealth and ordained Korean clergy, Christianity spread and grew.  In 1865 there were an estimated 20,000 Catholics in Korea. At this point persecution began. Thousands of converts died. Many of these martyrs have been canonized as saints.

In 1970, Korea was still recovering from the war and it was a poor country; men and women worked in the fields to plant rice and vegetables for their livelihood. Those who had skills could work in the factories. But the work was tedious and tiresome.

In the course of my years in Korea as a missionary sister, I had the privilege to be assigned in different places. First in Oc Pong Gu, Kusan, where our convent, located in Kunsan, was near an American Army Base. Through our American sister, Sr. Rose Virginie Hayes, who asked the base commander if the sisters could attend the Catholic Masses at the base, because there were no English Masses in all Korean churches, the commander, being a Catholic readily agreed. This made the sisters so happy. The Korean sacristan was a Catholic and he became a friend of the sisters.

Oc Pong was a lovely place far from the city. Near the convent we had a residence for girls working  In the factories. Most of them finished elementary education. When these girls came back home in the  afternoon they looked so tired and weak. We took good care of them so that they wouldn’t get sick. When a girl got sick, a Good Shepherd Sister looked after her and if necessary brought her to the hospital. Close to the convent there was a university. Some of the university students would come to our place and teach the girls subjects needed to pass the government exams. Those who passed received a certificate equivalent to a high school diploma.

Support for young women and men

Sr. Rose Virginie Hayes and Sr. Anna Marie Warnig did counselling to the soldiers at the Base who had problems. These men had relationships with the local women, sometimes resulting in pregnancies. Some women had their babies aborted because their families did not know about their real jobs. We discussed in community what to do with the children born of American fathers and Korean mothers.

This is how the apostolate of adoption began. Sr. Anna Marie contacted her friends in the United States who were willing to adopt these babies. One day, S. Anna Marie, our Korean social worker and I visited a place in Kunsan where the women who had been working in prostitution stayed. We met the women and informed them that we wanted to help them. We suggested that instead of aborting the babies, they have the option of adoption. We informed them that there were childless couples in the United States willing to come to Korea to meet the mother of the baby to be adopted.

The Move to Seoul

After a couple of years, a visiting missionary from another city who also did social services asked Sr. Rose Virginie if we were planning to stay in Oc Pong forever. Sr. Rose Virginie answered, “No, we have to look for another place”. He suggested Seoul. He said that if we were thinking of religious vocations, you will not find them in this place.

Three Good Shepherd Sisters went to Seoul and with the help of friends, found a suitable place for the Sisters to transfer. Our new neighbors were kind and friendly; they became our benefactors. We a very sad to bid good bye to our friends In Oc Pong, but we promised to get in touch in the near future.

Korea continued its rapid development, from an underdeveloped agricultural economy to a developed industrial economy. But despite the economic progress, many of the youth were still uneducated. Many of the out-of-school youth from the rural areas who worked in factories did not have a decent place to stay in the cities. Some of them stayed in the factories where they worked and would sleep on sleeping mats. As a response to the need for decent housing for factory girls, the Good Shepherd Sisters purchased an adjacent lot near the convent. We built a house and on the second floor was the hostel for working girls.

University students would come to the convent to practice conversational English with the sisters.  When they heard that we had girls working in factories but had little education, they offered to come after their classes and teach the girls, and they could stay until 8 o’clock p.m. All were happy with this arrangement.

In Seoul, young women began to know about the Good Shepherd Sisters. They inquired how the Good Shepherd Convent started. During a visit to Korea of Sr. Louise Horgan, provincial leader, she met some aspirants and spoke with them with an interpreter. After this encounter she said ”I think the time is ripe to have Korean sisters”.

Korean candidates came and soon their numbers increased. During a Provincial Council meeting, it was decided that Korea should have its formation program and a novitiate in Korea. I was appointed formation directress for Korea Sector. My reaction was resistance because of fear and limited knowledge about formation. But Sr. Louise explained to me why I was appointed for this position, stressing the importance of formation of Koreans in their own country.

Since I had lived in Korea for a long time and had assimilated their culture, habits and mannerisms, and had experience of visiting different parts of Korea, she sent me to the Philippines to live in the novitiate to observe and learn their formation program. The novice directress, Sr. Marieta Velez, shared with me her papers on formation and I participated in all the activities in formation. I stayed in the novitiate for 3 months; it was a time of learning, prayer and assimilation and lots of work.

When I started formation work as novice directress, I had 5 novices and 4 postulants. I had all my formation papers translated into Korean language because Koreans didn’t know English. It was hard and very challenging but I survived with God’s grace and God’s blessings. I felt the Holy Spirit through the inspirations I received when I was in a difficult situation. The Sisters were sent overseas for training in English, in leadership, in Good Shepherd spirituality. I had the joy and privilege of working with our Korean sisters from aspirancy, through postulancy and novitiate.

From Seoul community, I was transferred to Chuncheon community where the apostolate was helping single mothers. We had a farm where we planted vegetables; there were also fruit trees – apples, pears and persimmons. There were young boys and girls (high school students) who came once a week and we had Bible sharing. My impression of Korean Catholics is that they are very devoted and faithful in their Catholic faith.

The long years I lived in Korea were very challenging years for me. Learning the language was very exhausting. But the moment I got involved in our ministry and met Korean people and interacted with them, I felt the inspiration of the Holy Spirit working in me. Those years were also happy and enjoyable.

Return to the Philippines

As the Korean Sector continued to grow and has become the Northeast Asian Province composed to Korea, China, Macau, Hong Kong and Taiwan, I realized it was time for me to go back to the Philippines. After 44 year as a missionary in Korea, I wanted to reconnect with the Good Shepherd Sisters in the Philippines and with members of my family whom I have not had contact for a long time. With the help of my spiritual director who guided me in my discernment to return home, I returned to the Philippines in December 2014.

I was happy to see the growth of the Korean sisters.

The mustard seed that was planted by the foundresses in Korea more than fifty years ago, has become a tree bearing much fruit in the Good Shepherd fold.

I will forever treasure in my heart my experiences in Korea.

I thank the Lord for His goodness and love.

Now, with Simeon, I can sing my Nunc Dimittis.